So, things have been happening, and stuff has been coming in! I’ve uploaded the final version of Queen of Ice for Monday’s release, and I’ve also been getting the paperback ready for publication. As an aside, which I’ll reiterate on Monday, Amazon has changed their print-on-demand software, so the spine font is likely going to be different on my books now. I also intend to change the book size slightly for future series, but am keeping them the same for the moment. Anyway, on to the news!

First off, the audiobook of The Avatar’s Flames is up for pre-order on Audible, though I’m not seeing it on iTunes yet, and is scheduled to be released on November 20th. Unlike my other audiobooks, Tantor Media is producing this, so I haven’t heard the audio yet, and they also are releasing it across a broad number of storefronts, so you should be able to find it at places other than Amazon, Audible, and iTunes. This will also be the case for the rest of the trilogy.

Next is something else important. I’ve scheduled the release for The Obsidian Palace for January 21st and put it up for pre-order! My apologies for the odd description formatting, but something has gone weird on Amazon’s end, and it isn’t registering paragraph breaks (Edit: They appear to have fixed the formatting, thank goodness!). I believe I’m about halfway through the rough draft of The Obsidian Palace as well, and I’m enjoying writing it, as well as a few twists I didn’t expect to the story.

Last is something I didn’t expect to get back this week. Back in July I got an art piece commissioned for Andrea Esren, in my short story Broken Chains. Well, I liked the piece enough that I commissioned another for the other main character, Raela Silversworn. I expected the piece a while ago, but life fell apart on the artist, including having to move and not having time to work on art, so I just got it back this week. I’m putting both of them below, each as though they were the cover of the book. They may not be perfect, but I quite like them and wanted to share. 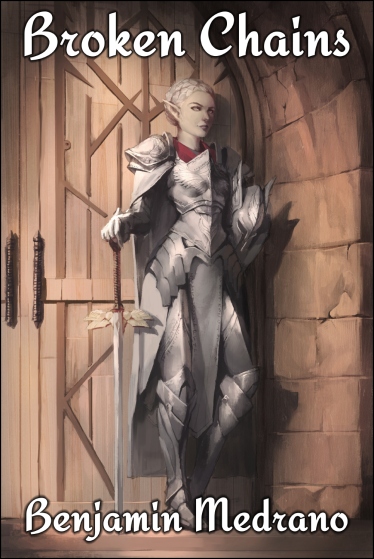 That’s it for now! I’m really looking forward to next week!